Mobile testing involves spotting bugs in a mobile application and fixing them – ranging from identifying sign-up issues, breaking in the payment process, or finding glitches in navigation before it hits the market. This testing can be done manually or with automation, and utilizing the right testing strategy helps meet all quality and usability requirements. Among the elements necessary for a seamless testing process is the selection of the right mobile testing devices. There are 2 main types of devices for testing: real testing devices and virtual testing devices (emulator and simulator)

What Is a Real Testing Device?

Real testing devices are actual handsets used by end-users outside the testing environment.

For the purpose of testing, the team usually acquires mobile devices in great variety in models, OS, OS versions, screen sizes, etc. Testing on these devices also allows testers to check the functionality and behavioral pattern of the application.

Some of the advantages of real testing devices

Some of the disadvantages of real testing devices

What Is a Virtual Testing Device?

There are two main types of virtual devices: simulators and emulators.

Simulators are virtual testing software built for different operating systems for a specific purpose. They are basically made for iOS devices (iPhone and iPad) since they are not like Android devices, which are easy to emulate. The iOS simulator imitates the iOS and runs the required application within the environment by taking charge of the computer’s operating system.
Besides, iOS simulators work on macOS only because the simulator needs Apple’s native Cocoa API (a library of frameworks to handle GUI, runtime, and other operations). Therefore, testers must use either MacBook or virtualized macOS on their systems. Also, these simulators cannot imitate hardware, and some functionalities (battery state, motion sensor, and cellular interrupts) cannot be tested with it.

Emulators are virtual testing software on a computer that imitates both the software and hardware configuration of a mobile device or another computer. It works on an ISA (Instruction Set Architecture), which is written in machine language that the processor understands. The emulator imitates the target (mobile device) processor by translating its ISA into the one used by the system through the binary translation process. This helps the computer to create a reliable virtual testing environment.

Some examples of the widely used emulators for testing are Android emulators, iPhone emulators, etc. Emulators are also making moves in the mobile cloud testing field with the availability of cloud-based android devices.

Some of the advantages of virtual testing devices

Some of the disadvantages of virtual testing devices 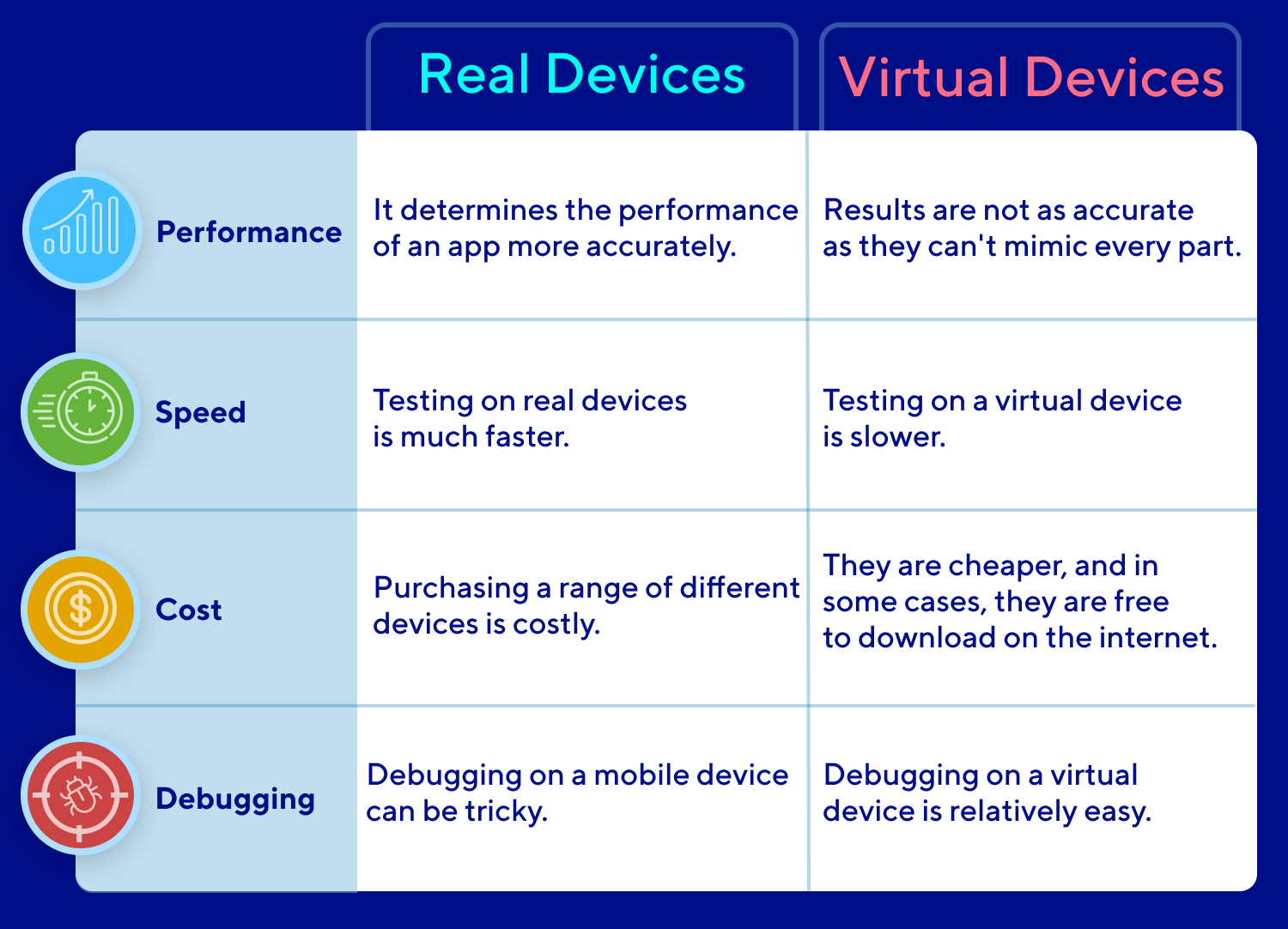 Both real devices and virtual devices offer dynamic features, making them suitable for one phase of testing than the other. When applied to mobile application testing the appropriate way, these testing devices can help organizations meet their requirements. The best practice for use are:

Virtual devices can be considered suitable for the beginning of the testing process. They offer a better debugging facility to speed up the testing cycle of the application. In addition, virtual testing devices are cost-effective compared to buying new smartphones. They allow testers to test their application on a wide variety of handsets using different mobile networks around the world.

The final phase of testing

For testing the application before release, real testing devices are the best options. It provides more accurate results by allowing testers to check every possible scenario in the testing cycle. Therefore performance testing, network feasibility, smoke testing, interoperability, sanity testing, and a large part of regression testing should be done on real devices.

Mobile testing continues to increase in importance due to the significant role mobile applications play in our everyday lives. Although it requires much testing to reach the stated objectives, one of the ways to achieve that is by choosing the right tools (real devices, simulator, and emulator). However, combining these tools is the best way to create an excellent testing solution, whereby you can save cost, time, and obtain a better ROI.